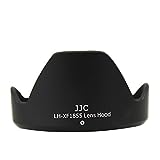 JJC LH-XF1855 Lens hood is designed for Fujifilm Fujinon XF14mm F2.8 R and XF18-55mm F2.8-4 R LM OIS. Lens hoods are primarily designed to prevent unwanted stray light from entering the lens by extending and shading the end of the lens. JJC LH-XF1855 Lens hood features a non-glare matte finish on the interior surface to further prevent or limit lens flare. In addition, since the end of the lens is extended, you also get the added benefit of some extra protection from accidental impact. This flower shape lens hood also takes the final image’s shape and aspect ratio into account. It allows the lens hood to block stray light with the higher portions of the lens hood, while allowing more light into the corners of the image through the lowered portions of the hood. This hood is also reversible to stay on lens when not in use. Now the original Fujifilm lens cap can be attached to the lens normally.

This website uses cookies to improve your experience while you navigate through the website. Out of these, the cookies that are categorized as necessary are stored on your browser as they are essential for the working of basic functionalities of the website. We also use third-party cookies that help us analyze and understand how you use this website. These cookies will be stored in your browser only with your consent. You also have the option to opt-out of these cookies. But opting out of some of these cookies may affect your browsing experience.
Necessary Always Enabled

Any cookies that may not be particularly necessary for the website to function and is used specifically to collect user personal data via analytics, ads, other embedded contents are termed as non-necessary cookies. It is mandatory to procure user consent prior to running these cookies on your website.